Due to the COVID-19 pandemic, The Space in Sound – that this Masterclass is part of – is postponed to a later date in autumn. We will update this post once we have more information. 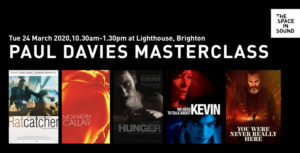 Using examples from his own work such as Ratcatcher, You Were Never Really Here, 71 and Hunger, and films that have influenced him, including Eraserhead, A Man Escaped, and Apocalypse Now, Paul will discuss how sound can create both external and internal subjective spaces in film, and how Sound can add physicality and substance to a flat two-dimensional image on the screen.

Clips and a sound design session from Saint Maud will be shown to demonstrate that the off-screen space and the internal psychological space are just as important as that which is shown onscreen. As film makers, we can use these spaces to help create the emotional and dramatic world that the characters inhabit.

Paul will also explore the grey area where sound can be used as an alternative to music and as a complimentary partner to score, looking at the differences and similarities of sound design and music.

The masterclass is limited to 20 participants.