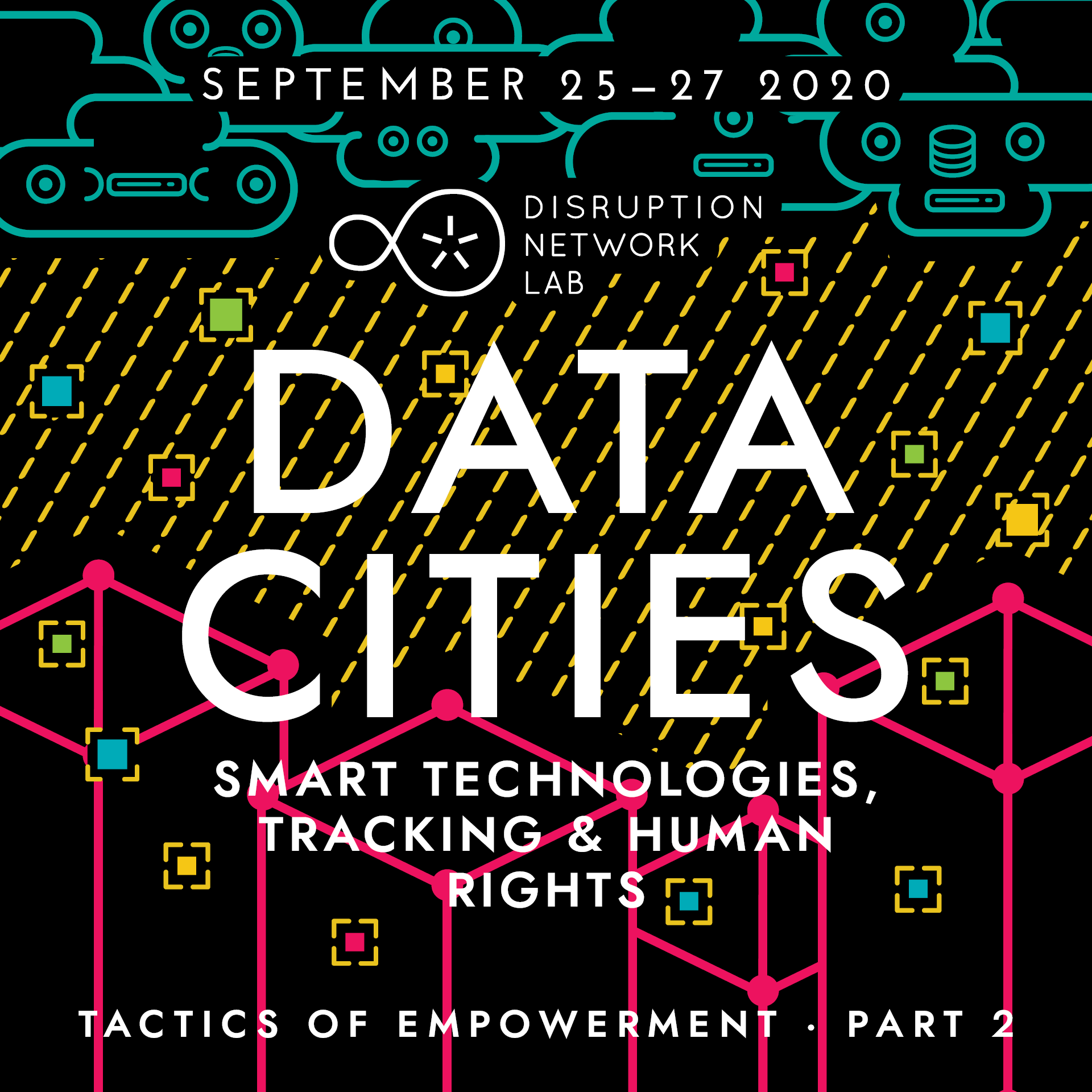 The 20th conference of the Disruption Network Lab (Part II of Tactics of Empowerment), curated by Tatiana Bazzichelli & Mauro Mondello, focuses on smart city visions for the future, addressing the implications of new data policies, as well as analysing the unintended negative consequences of tracking and surveillance to our privacy and freedom.

The use of smart technologies and tracking apps has become part of a crucial debate during the COVID-19 pandemic, as well as the problematic controversies surrounding data protection. As technology becomes embedded within everyday objects, the dynamics of city systems and lifestyles are evolving from linear approaches to real-time sensory exchanges with feedback data across city services, operations, bodies, and activities.

New smart cities have already been built and still more are at the planning and development stages, in countries such as China, Singapore, India, Saudi Arabia, Kazakhstan, Jordan, and Egypt. The foundations of these cities include fully integrated infrastructures, Internet and communication systems, water services, electrical and power grids, security appliances, smart transportation—all features which were once just science fiction. By 2045, an extra 2 billion people will live in urban areas and by 2050 the world’s population is expected to reach 9.8 billion. China and India alone will require up to 2.8 billion square metres of new residential and commercial space a year.

Future cities will need to employ purpose-built artificial intelligence programs and machine-learning algorithms to process the vast amounts of incoming data, and we will increasingly use smart connected digital platforms to draw data from the Internet of Things. But this same data will also be very lucrative in the hands of big tech corporations.

Cities may occupy just 2% of the Earth’s land surface, but they are home to more than half of the world’s population and generate 80% of all economic output. Forest City, for example, a partnership project of Chinese developer Country Garden and Esplanade Danga, has been designed to attract masses of Singaporean residents and Chinese real estate investors looking to offshore their assets. Due for completion in 2035, it is envisioned as a new economic engine that could compete with Singapore and create 220.000 new jobs. Saudi Arabia has also started building the first residential area of their proposed $500 billion futuristic city: the city of Neom. 25,900 square kilometres have been allocated for the development of this urban area, which will stretch into Jordan and Egypt. Horgos is the $3.25 billion new city on the Chinese side of the China-Kazakhstan border being built for 200,000 people. On the Kazakhstan side, Nurkent is a purpose-built city linking together the various transportation and industrial projects of the Khorgos area. Nurkent is set to grow into a full-fledged 100,000 person commercial and cultural centre by 2035.

The onset of the COVID-19 crisis has pushed social control one step further. We have already witnessed increasing forms of monitoring via tracking devices, drone technologies and security infrastructures. What will the data cities of tomorrow look like? How will cities of the future be designed? And how will the development of smart technologies affect human rights and individual privacy?

This conference is co-curated by Tatiana Bazzichelli and Mauro Mondello, an investigative journalist who has been traveling in Asia studying transitional cities and new cities of the future. Bazzichelli and Mondello were also co-curators of the Disruption Network Lab conference TERROR FEEDS: Inside the Fear Machine in November 2017.