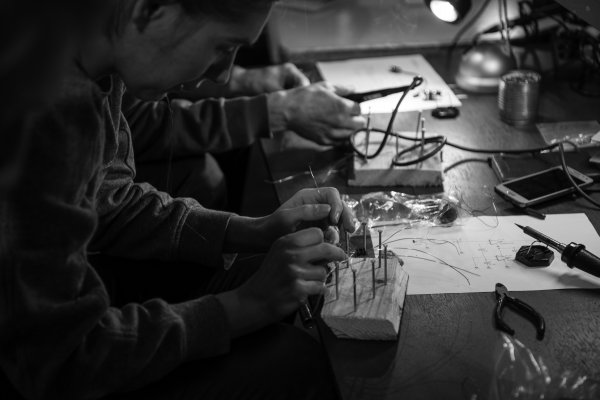 In this podcast, John Richards talks about the Luddites and Leicester, touches on his views on functionality, control, and safety nets, and talks about his approach to speculative circuitry, authorship and composition. Richards also describes the challenge of recording a performance-based practice and opens up his Dirty Electronics praxis through props and projects.

Under the moniker of Dirty Electronics, British musician and maker John Richards explores the crossroads between electronic circuit design and live performance, picking up the baton of David Tudor’s tradition of ‘composing inside electronics’. With emphasis on collaborative making and a holistic approach to performance, Dirty Electronics’ speculative circuits are documents of the larger collective experience that they are part of: expanded and quite unconventional workshops / installations unfurling as 21st-century happenings within communities of practice with a strong DIT (do it together) ethos, where usual divisions among designer, maker, composer and performer become blurred. A live practice that is durational and situated, stretching from the workbench to the stage, in a particular time determined by the objects being built. John Richards’ instruments, are not meant to be played – they are meant to be attended and explored in order to find the sound in them. As he often says, “virtuosity is in the listening” and not in the mastering of the instrument. The idea is to explore sound through materials and to embrace danger and failure.