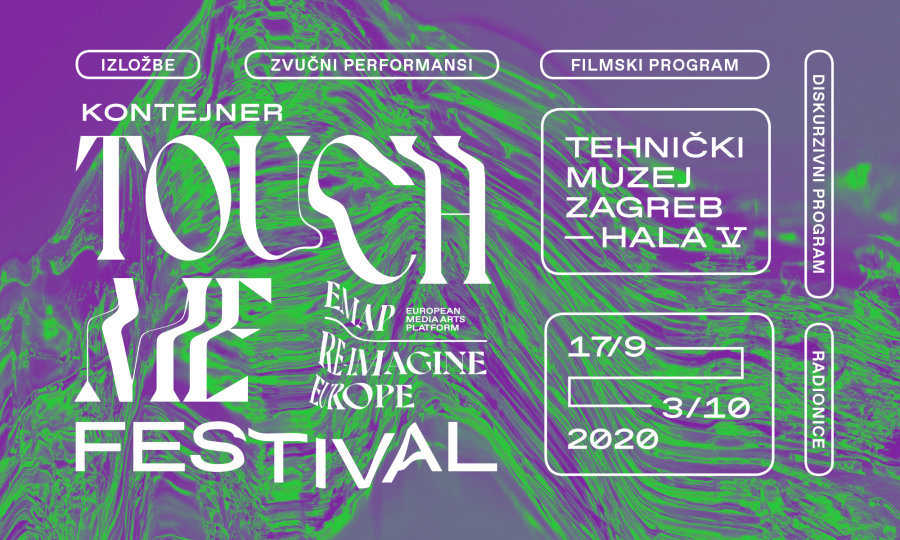 Touch Me Festival deals with interconnections between art and science through themes that engage and inspire contemporary artists and scientists in the field of biology, chemistry, physics, mathematics. From the perception of time to the exploration of pleasure, Touch Me Festival offers new sensation and opens up new dimensions of human perception, presenting within each of the triennial some of the most important projects of international and Croatian investigative art.

In the midst of crisis and forbidden touches, we are grasping new futures!

Since 2005 and through its five past editions, Touch Me festival has so far explored dark matter, time, pleasure, intelligence and energy abuse. Developing continuously at the intersection of art and science, this year the festival is bigger than ever!

TOUCH ME EXHIBITION AND FILM PROGRAMME
This thematic programme reflects on biotechnological and other possibilities of hybrid, symbiotic and chimeric intertwining of living and non-living beings, exploring what happens when we truly get rid of nature – culture, living – non-living, human – non-human oppositions.

RE-IMAGINE EUROPE | This international project is co-created by a network of 10 cultural institutions from across Europe, active in the sphere of contemporary artistic production and transnational networking, at the same time addressing the social and political challenges we face today. As part of the festival, it brings a diverse sound performance programme with artists working in the field of experimental music and related art forms, sound research and new technologies.

MORE INFORMATION ABOUT THE DISCURSIVE PROGRAMME AND WORKSHOPS COMING SOON

ABOUT TOUCH ME FESTIVAL | Touch Me is an international manifestation that explores the relationship between art and science, created under the concept of Olga Majcen Linn and Sunčica Ostoić. It has been held every three years since 2004 and is organized by KONTEJNER | bureau of contemporary art praxis. The festival is one of our main original programmes: with the triennials Extravagant Bodies and Device_art, it defines our focus on art at the intersection of science, technology and social matters.